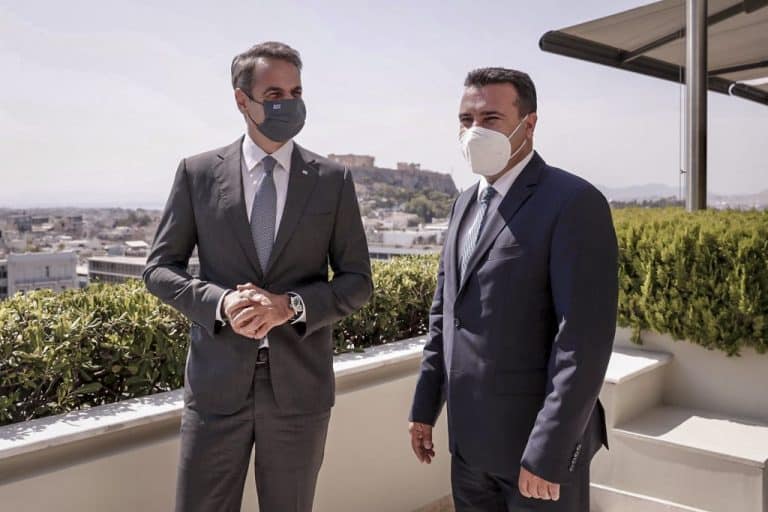 Bilateral relations with a focus on the development of economic cooperation between Greece and North Macedonia dominated the talks during a working lunch hosted by Prime Minister Kyriakos Mitsotakis on Wednesday in honour of visiting Prime Minister of North Macedonia Zoran Zaev, who is visiting Athens to take part in the Economist conference.

During the lunch, the two leaders discussed the course of bilateral relations and particularly the development of the economic cooperation, as well as North Macedonia’s European perspective.

On his part, Zaev committed to the need to properly implement the Prespes Agreement.

“The bilateral relations of Greece and North Macedonia have entered a new era,” underlined President of the Hellenic Republic Katerina Sakellaropoulou during her meeting with visiting Prime Minister of North Macedonia, Zoran Zaev, at the Presidential Mansion on Wednesday.

Sakellaropoulou congratulated Zaev on his re-election and underlined the importance of implementing the Prespes Agreement in its entirety, according to the letter and the spirit of the agreement, with the aim of deepening the two countries’ bilateral relations.

She also pointed out Greece’s steadfast support for North Macedonia’s European perspective, according to the rules for the accession of a new member-states and based on the respect of good neighbour relations.

On his part, Zaev expressed his deep satisfaction to be visiting Greece at this time, noting that the Prespes Agreement is bearing fruit as bilateral relations have improved in all sectors. He also said that there are huge margins for cooperation with Greece, North Macedonia’s strategic partner, with which it has ties of friendship and trust.

At the same time, Sakellaropoulou briefed Zaev on Turkey’s destabilising actions and its illegal behaviour in the Aegean and in the Eastern Mediterranean. While the situation seems to show some improvement, said Sakellaropoulou, the EU and the neighbouring countries should send a clear message that violence does not create right and that the prosperity of peoples is based on the good neighbour relations.

On his part, Zaev said that Greece can depend on its friend, North Macedonia.

It was the first time Dendias met with his new counterpart, Osmani.

With both, the Greek minister reiterated Greece’s commitment to the European prospects of the Western Balkans, including North Macedonia, as a way of establishing security and stability in the region.

The main opposition party leader told his former counterpart he was pleased to see him in Athens as the neighboring country’s re-elected prime minister.

Zaev said that it was “a dream come true” to come to Athens after the signing of the Prespes Agreement, to discuss matters relating to “business, economy and various collaborations.”

Tsipras told Zaev that “I am also happy that my country continues to support your country and the Prespes Agreement, despite the fact that Greece’s ruling party stood against it when it was an opposition party.”

“Today,” Tsipras continued, “it not only respects it, but also fights for the Prespes Agreement,” to which Zaev replied “this is a real success.”