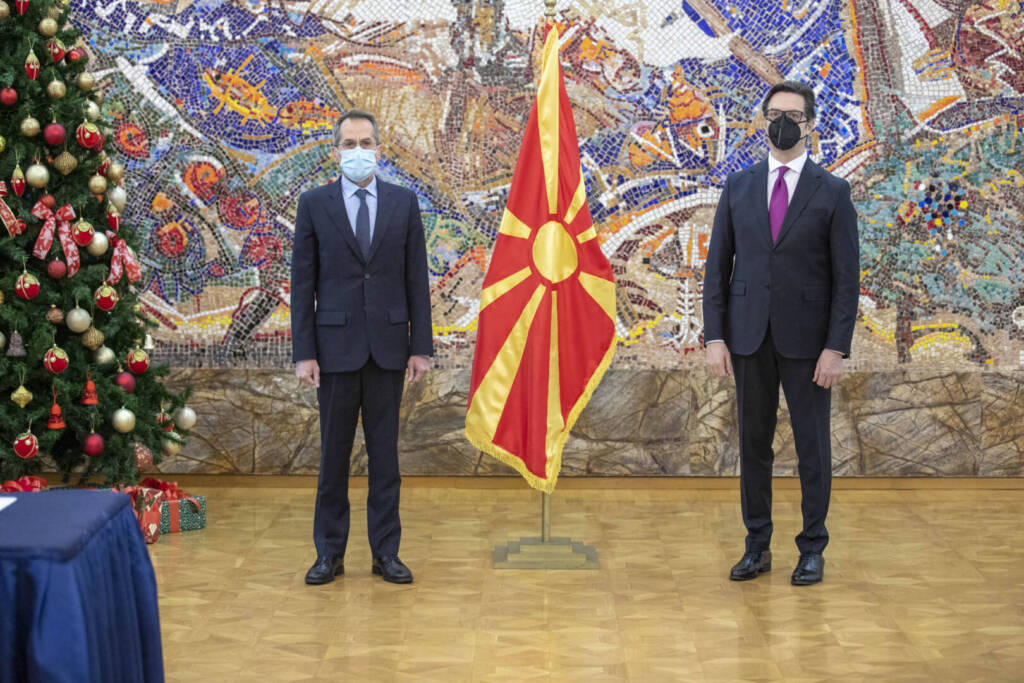 At the ceremony, President Pendarovski said that the relations between the two countries today are characterized by friendship, high level of political dialogue and commitment to the policy of good neighborliness and regional cooperation. He said he was confident that in the coming period, implementation of specific projects, expected to further boost economic ties, will be top priority, Pendarovski’s office said in a press release.

Ambassador Koundouros said Greece is ready to support the country in the process of joining the European Union and expressed a strong commitment to strengthening overall bilateral relations, with special emphasis on promoting economic cooperation.

In his welcoming address, President Pendarovski wished the Ambassador success in his new post, adding that his professional experience so far will contribute to enriching the bilateral relations and cooperation of the two countries ‘sharing the same pledges for peace, freedom, democracy and prosperity of the region and beyond.’

“With the signing of the Prespa Agreement, a new chapter in our bilateral relations began. With the Agreement, we showed how open issues between two neighboring countries can be resolved, and we also paved the path to significantly enhanced cooperation, based on mutual respect and partnership, which will be, most of all, beneficial for our peoples,” he said.

The vitality of our relations, Pendarovski added, has been shown in action in dealing with the consequences of the COVID-19 pandemic and the cooperation and coordination between the institutions of the two countries in the first wave, in view of the successful repatriation of citizens of both sides, was really at a high level.

“We should not forget the constant joint effort and contribution to the security and stability of our common border in dealing with migrant flows, which still cause serious consequences and troubles in Europe and beyond. Based on these positive examples, I am deeply convinced that there are numerous opportunities before us for further advancement of bilateral cooperation in all areas of mutual interest,” the President said.

According to him, Greece is in the top five trade partners of North Macedonia, which paves the way for improving business relations.

Mentioning that North Macedonia in 2020 joined NATO, Pendarovski said the country is facing an important process to fulfill its aspirations to become a member of the EU. “We sincerely count on the strong support of Greece, as a friend, ally and strategic partner of the Republic of North Macedonia in this process. Our expectations are that in 2021 the first Intergovernmental Conference will be held, which will mark the official start of accession negotiations, which will give us the opportunity to practically prove that we are ready to move the process of our European integration forward,” stated the President.

He said he hoped that during the Ambassador’s term, the two countries will further enhance the bilateral ties and cooperation.

Addressing the ceremony, Ambassador Koundouros said Greece is committed to improving the close cooperation and friendship with North Macedonia. “As direct neighbors, we can achieve a lot by working together. There are obviously promising possibilities to further strengthen bilateral relations in many areas of common interest, in a way that will benefit our respective countries and their citizens. This includes our economies and we view ever closer economic cooperation to be top priority. There are encouraging signs and we should seize the momentum,” he stated.

One of the pillars to build a solid relationship in the present and for the future is the full, consistent and in good faith implementation of the Prespa Agreement, the Ambassador stressed.

“Along with the important step of NATO accession, the Republic of North Macedonia has chosen the path of European integration and has become candidate for accession to the European Union. Greece views this process with satisfaction, as it has proved to be a factor of stability, democracy and prosperity in Europe, and is essential for our part of the continent as well,” Koundouros said.

Greece, he added, is convinced of the necessity of regional cooperation based on good neighborly relations. “Indispensable condition for that is the respect for the United Nations’ principles and the observance of international law and international Treaties and agreements by all, without exceptions.”

As a member state of the EU, Ambassador Koundouros said that Greece is willing to support the country in taking the accession process forward, by fulfilling the necessary conditions, and in making eventually this fundamental choice of your people a reality.