OKTA installed a photovoltaic plant at the International School NOVA 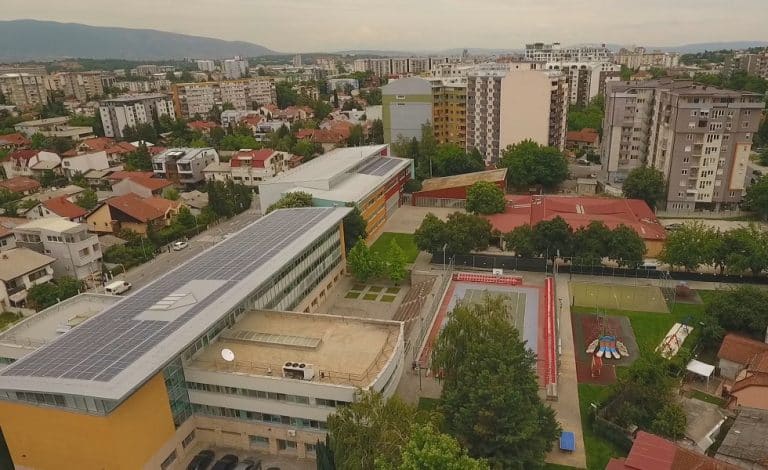 OKTA AD – Skopje and the International School NOVA collaborated to put into operation two photovoltaic power plants, which have been placed on the roof of two buildings of the school. The PV power plants will generate electricity from renewable sources, part of which will be used for school own consumption, while the rest will be intended for the free market. This is the fourth PV power plant installed by OKTA and is part of the company’s strategy to be present in both electricity production and supply markets, through application of innovative technologies and environmental protection.

“With the installation of this new photovoltaic power plant, we continue the process of OKTA’s transformation into a modern energy company that continuously increases its capacity for production of energy from renewable sources. With these kind of projects we also help our partners to rationalize electricity consumption through significant savings compared to the use of energy generated by burning of fossil fuels. In addition, it is especially important for us to contribute to raising awareness of the need for a greater use of renewable energy sources and reduction of carbon footprint which has a significant effect on the environment”, said Vuk Radovic, Chief Executive Officer of OKTA.

The two photovoltaic power plants have a total installed capacity of 125kW and an expected lifespan of more than 25 years. A total of 440 photovoltaic panels from the world-renowned manufacturer Multicrystalline Trina Solar, three HUAWEI SUN2000-60 KTL-MO inverters and one HUAWEI SUN2000-33KTL-А inverter were installed. Annually, the power plants will generate about 160 MWh of green electricity.

“As a school in which the main focus is put on innovation and application of technological development in accordance with the environmental responsibility, the installation of the photovoltaic power plant is entirely correlated with all that we stand for and we convey as a value to our students. The cooperation with OKTA showed that a successful synergy is possible between a large energy company and an international school. We believe that this investment will have a positive contribution to our operations, but even more importantly, it will raise the awareness among our student population for the need of a personal contribution to a responsible behavior toward our surrounding”, said Ivan Novakovski, Director of the International School NOVA.

OKTA has already installed three photovoltaic power plants. One is located within the company and is used for OKTA’s own consumption, while the other two are installed at the Faculty of Electrical Engineering and Information Technologies in Skopje and at the Confection and Knitwear AD Edinstvo in Strumica. In the upcoming period, the energy company plans to put into operation a new production capacity.